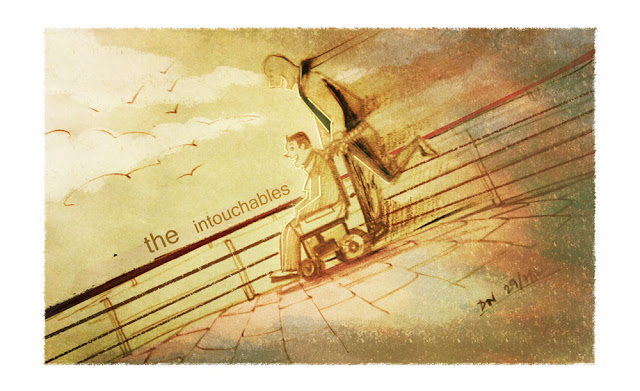 A beautiful film establishing a very sensitive relationship between a caretaker and a quadriplegic rich patient from Director Olivier Nakache and Eric Toledano.

Opening sequence:: weed smoking men, Philippe and Driss pace up in their car and is halted by police. They act as if Driss was taking Philippe to the emergency hospital as he is quadriplegic. The police buy it and escort them to the hospital. They laugh at the situation. Fade out.

Setup:: Act 1::  Driss, a black from Paris, around 26 yrs of age,  is just out of jail after 6 month imprisonment for robbing a jewelry store He seeks employment through state welfare association. He goes for an interview for a job of a caretaker for a rich French art critique, Philippe. . He meets his mom (actually in law-aunty who has raised him).

Plot point 1:  He is thrown out of the house by his aunt for his criminal behavior. Driss’s sarcasm wins Philippe’s interest and he gets hired for a month on trial.

Confrontation:: Act 2:: Driss starts taking care of Philippe. He leans more about his job from other attending nurses and house employs. The relationship starts with Driss making fun of every bit of Philippe’s condition. He speaks out right to everyone around. Philippe likes towards Driss increases as and when times of pain due to medication arrives. Driss accompanies Philippe on long walks and strolls across Paris at midnight. Philippe felt freedom in the breath of air and happy after a long time. They often chatted about Philippe’s past and how things changed. Driss got interested in painting and with the help of Philippe, sold a piece for 11000 Euros. Both became friends. Driss got a taste of life that he would have never expected. Driss forced Philippe to make contact with a secret admirer of Philippe’s poems, which was very difficult for Philippe to do being in a state of paralysis and being shameful for such a state.

Plot Point: Driss’s younger Brother comes to meet Driss and take him home. He is informed of his aunt’s forgiveness. On Philippe’s birthday, Driss gives him a day to remember.

Resolution:: Act3:: Driss takes up a job at a courier place and joins his family. Philippe feels lonely and un-connected with the new caretakers. He does into depression and solitude. Philippe’s world turns grey and mundane which becomes unbearable for him. Driss in inform of the situation. Driss arrives and takes control of the situation. Philippe becomes happy again. Finally Philippe take Driss to the same place where he had got injured during doing Para-gliding. They both Para-glide and win over their fear being a team.

The Film takes time to establish the backdrops of two characters coming from very different statues of life. Paris being a cinematic place brings in art and music sides of human life.
Posted by debanjan at 4:38 AM